Yesterday, (July 23, 2015) the Senate Appropriations Committee reported out a Fiscal Year 2016 spending bill for Financial Services and General Government which included appropriations for the Treasury Department and the CDFI Fund.

The Committee’s reported bill included a level of $221 million for the CDFI Fund–an amount $9.5 million below the FY 2015 level and $12.5 below both the President’s Fiscal 2016 Budget request and the House request of $233.5 million. The Committee’s draft report raises questions about the applications and awards process, lack of transparency in the Fund’s programs, and the ability to verify investment impacts. It directs the Fund to establish clear reporting requirements and to collect data on the impact of Fund on underserved populations and communities. The report also directs Treasury, in designing programs, to take into consideration the challenges of rural and non-metro communities and encourage the Fund to improve the geographic diversity of its award recipients.

Finally, if the lack of a budget agreement to raise the caps set by the Budget Control Act were not a death knell for this bill, the rewrite of elements of Dodd-Frank, the limitations on the CPFB, reductions in IRS, and short funding of CFTC ensure that it will never make it to the Senate floor, let alone become law.
While the Senate bill was not perfect, it is not fatal either.  The bill is not weigh-down over the dispute over budget allocations but all the riders and re-writes of federal banking law.  The chances are very good for getting something close to the House bill. 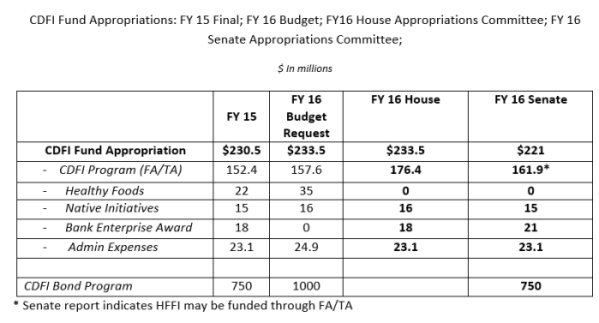